Book Review – Congo’s Environmental Paradox: Potential and Predation in a Land of Plenty by Theodore Trefon

Jonathan Silver says Congo’s Environmental Paradox by Theodore Trefon might prompt consideration about how we value Congo’s contribution to the world.

In Congo’s Environmental Paradox; Potential and Predation in a Land of Plenty, Theodore Trefon has written an important book that weaves together an overview of the country’s key ecological resources with a concise and important political analysis. Trefon examines this environment incorporating over a thousand minerals, from some of the world’s largest known copper reserves in the Katanga Province, to 46 per cent of the global supply of cobalt and the presence of europium, classified as a critical material for future production in the electronics industry. And it is not just precious minerals to be found and exploited as Congo holds “more than half of all Africa’s lakes, rivers, streams and wetlands” (p70) and the second largest rainforest on the planet, known as nzamba (in Lingala). 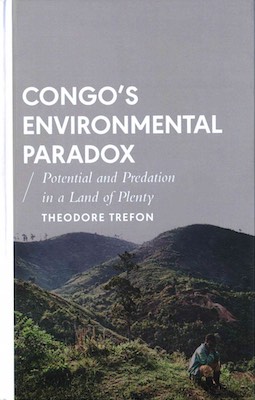 Even if the author casts doubt on the ‘myth’ of total mineral wealth at US$24 trillion, or cautions about speculation that there “could be more oil than Saudi Arabia” (p100), it is strikingly clear that the collective resources of the country are the very epitome of natural wealth. Yet as a popular saying in Congo goes, “our beds should be made of gold and diamonds but we are just sleeping on straw mats.” (p123)  This is the heart of the environmental paradox articulated in the book.

Another compelling example of this paradox lies in Trefon’s question, “how can so many people living in a country with so much water be thirsty?” (p85) as he informs the reader about Mbuji-Mayi, a city built out of the diamond trade that has only 3000 water connections for its ever growing population of 1.5 million. It is these contradictions that are the departure point for Trefon when examining different sectors such as mining, water or the forests, and considering the historic and contemporary actors involved in utilising, exploiting and profiting from natural resources while most struggle to get by (and yet in their own ways compound these dynamics through practices such as artisanal mining). In a country that could feed a continent, yet imports foodstuffs such as frozen chickens from Europe, developing this integrated political ecology of different resources is an achievement that is both important and timely.

Perhaps what is most striking about the book is the way that Trefon continually reflects on the importance of Congo beyond its borders, speculating that “the destinies of Congo and the world will continue to be tightly intertwined.” (p147)  By this stage of the text, the reader might also draw from Trefon that Congo could be understood as underpinning the experience of modernity. From the long nightmare of slavery that established the economic power of the West through to the rubber harvesting of King Leopold II; to the uranium used to bomb Hiroshima and Nagasaki; and the cobalt so essential to mobile telecommunications; this natural wealth has been integral to the materiality of modernity. Perhaps it is time we understood this country as the centre of the modern world. And yet, Congo’s crucial role in the modernisation of the world has been obscured in a discursive mirror that has offered a troubling reflection of a ‘heart of darkness’. Part of the power of this book lies in showing that these natures have been the foundations of global modernity, leaving the reader pondering both Congo’s environmental history and future in new ways.

The work of Trefon in charting both the longer and more recent histories of the governing of natural resources in Congo makes explicit what has already been stolen, expropriated, taken, destroyed and depleted in order to support the global economy stretching back centuries. Through such an analysis the book might prompt consideration about how we value Congo’s contribution to the world and how such calculations could provide a basis for claims for reparations that stretch beyond slavery to incorporate the broader socio-natural exploitation of the country. 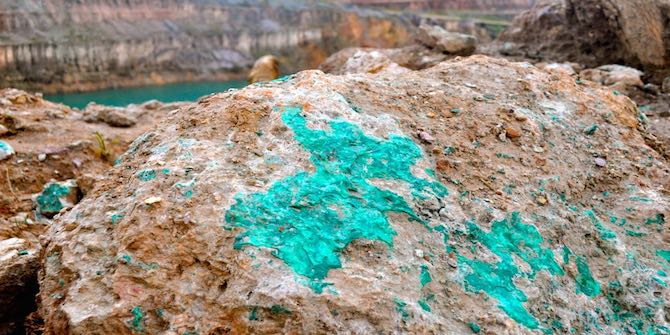 A copper mine in Katanga – Photo Credit: Fairphone via Flickr (http://bit.ly/2ibSRKH) CC BY-NC-SA

And when considering the future, the author wonders if Congo is “condemned to always be the land of the future” (p3), and while he is right to offer some uncertainty, by this stage it has become clear to the reader that the underdevelopment of this country is a crucial mechanism in global capitalism through which economic growth happens elsewhere. Here, Trefon provides fascinating details to some yet to be enacted infrastructures required to exploit the latest wave of valuable resources. These include the potential emergence of new infrastructure corridors being assembled through oil production, to the surging cities on the Indian Ocean in which mega infrastructure projects like the Lamu port are shifting urbanisation dynamics well beyond Congo’s borders, or the Interbasin Water Transfer Project designed to ‘save’ the disappearing Lake Chad via a 2400 km canal and described by the author as an “infrastructure development fantasy” (p73) peddled through “international pressure on Congo” (p74).

There are passages in the book that hint at a different future. Perhaps the most strikingly important moment in the country’s recent environmental governance described in the text is President Kabila signing the new Agricultural Code including Article 16, which restricts foreigner access to farmlands and may help to forestall another scramble for the natural resources of Congo. As the author argues, drawing on Saskia Sassen’s work on the importance of land to advanced capitalism, this is likely to be a new frontier in capital’s endless (and destructive) search for profit. It is examples like this that leave the reader reflecting on whether the country can begin to resist its historical exploitation and take control from the dizzying array of state and non-state foreign actors who seek only to plunder and loot.

Trefon is clear and knowledgeable about the plethora of Congolese interests that cause so much devastation (and that have been brought back into focus in a recent investigation by Bloomberg News) but he is always able to show the international dimensions to such networks of value extraction. For instance, he argues that “the World Bank strategy backfired” (p136) when considering the enforced privatisation of state-owned sectors, under the logic of inefficiency through showing how entrenched politicians and capitalists benefitted from the neoliberal regime pushed by the Bank on the Kabila government. One is left with the impression that even with a government and public sector that reformed and focused on addressing the multiple development challenges of the country, Congo’s environment would continue to be exploited.  As the author suggests, “important political economic priorities are decided upon not by the Congolese themselves, but by foreign actors and global dynamics” (p61).

The book concludes by hinting at how these  environments and their governance will change as the world economy shifts from older imperial centres like London and Washington DC to underpin the resource needs required for the rise of new world powers. However, these geopolitical shifts are likely to leave Congo caught in new episodes of the “predatory political economy” (p151) that has long affected this country, threatening the development of the estimated 150 million people living there by 2050, and some of the most pristine and biodiverse environments on the planet.

Trefon has crafted a sharp and concise overview of the country’s resources, the way they locate political economy both within and beyond the country and the dizzying array of interests reliant of such wealth. He has excelled in making sense of these complex networks, operations and circulations and this book should be read by all those concerned about global environmental change. Too often the role of Congo in underpinning global modernity is marginalised and forgotten, this book provides a sharp and well informed argument that shows that Congo’s environmental paradox is also at the heart of the world’s environmental paradox.